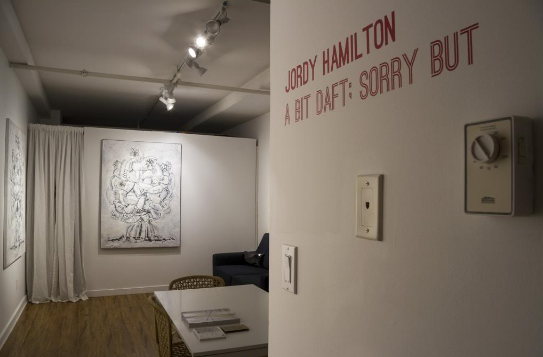 The Opening – The Flats – Jordy Hamilton

Get your contemporary art on this coming Saturday by attending The Flats Block Party. An all-day artpacked event: eight galleries, eight artist talks, four exhibition openings, the launch of a satellite exhibition space, and an exhibition of a unique collection of photographs from the 1800′s to the present. With so much to see and do you may be worried on how to devise a strategy to take it all in. Fret not, the lovely galleries of the flats have organized the day so that the events are staggered and roll into one another. One can take nearly everything in by starting their artstravaganza tour at high-noon on Great Northern Way. Want to learn more about the participating galleries and artists, visit The Flats Official Site. The event runs from noon until 8pm.

If that wasn’t enough to convince you to head over to The Flats this weekend, perhaps Marina Roy’s review of Jordy Hamilton’s exhibition that channels the spirit of Popeye, monochromatic abstraction, and cubism will get you going.  Saturday will be the last day to see this exhibition, and Jordy Hamilton will give a talk about the work at 5pm.

In the words of the comic icon himself, adopt a simple strategy to taking on The Flats Summer Block Party, “I’ll take you all on one at a time. A-gah-gah-gah-gah-gah-gah!”

A short review of Jordy Hamilton’s exhibition by Marina Roy:

“The hair of the dog?  To fight fire with fire?  A spike with a spike, networks with networking, institutions with institutionalisms?  Power with the accumulation of power? Strikes with strikes, violence with violence, class with class?  Escapism with escape… Art with art?  What means justify what end?  For the self? The career? The family? The nation? The world?  All’s fair in love and war, right?  Sorry, he says, but it’s all for my love Olive.

A small selection from a larger body of new paintings, this show stems from a single image cartoon of Popeye The Sailor Man. The cartoon’s relation to the depiction of time, repetition, violence, and love inspired the series. The paintings are constructed using a simple system. Right fist or left fist?  Back of the hand or front of the hand? White paint or black paint?”1

Considering so many of Vancouver’s commercial art galleries are exhibiting a love affair with abstract painting of late, I was pleased to visit Jordy Hamilton’s exhibition at Wil Aballe’s Art Projects space. One is confronted with a melee of trunks and limbs over and over again—in each painting, the repeated motif of the body morphing into a tree of Popeye forearms (with a solitary flower held up in a fist2 managing to remain unscathed up top), ground smashing up against figure, sincerity struggling with cynicism. One almost gets the sense that the artist’s painterly practice is not entirely comfortable with itself, to the point of self-mockery, and it doesn’t pull any punches either when it comes to its assessment of the art world. Although this is of course my interpretation (with a little help from the artist statement above). I see an irreverence in Hamilton’s work that might not be entirely legible at first sight, but I also see a search for something deeper dwelling in the paint. One can detect humour in his “flogging-a-dead-horse” painting strategy, and in the apologetic and self-deprecating title that greet us at the front door.

Does the self-conscious title refer to the embarrassment of admitting to the impulse to paint (and still not really knowing what it means to be a painter who has a lot to say besides…)? The title welcomes us as a warning just as we enter the gallery (it also reminds me of a few studio visits I’ve had with artists who are torn by doubt, and want to take a little pressure off the situation by bringing the work down a few notches in advance). You would think the title would be, “Sorry, a bit daft but…”, but that’s not the wording. The words seem jumbled, as if the artist were tongue-tied. And what we behold in actuality is essentially a jumble of body parts and paint strokes on canvas, arms over arms and fists over fists – is it the struggle of the artist with himself (beating himself up), or the artist fighting an invisible force—such as that of art (in all its institutional and romantic forms)? And why beat oneself up in the studio or in the arena of art, over this (painting)? What does it serve beyond the thirst for recognition? Or at the risk of sounding corny, is it a sublimated form of love?3

Hamilton tells us, the series is from a single cartoon image from Popeye The Sailor Man. Everyone from at least the artist’s generation of spectatorship back to Popeye’s debut in 1929 remembers the spinach-fueled fights of the Popeye comic strips and animations (Elzie Crisler Segar and Max & Dave Fleischer respectively). The love triangle of Popeye, Bluto and Olive always dominated the main plot line, with Bluto’s brute force and less-than-gallant intentions toward Olive being the bane of Popeye existence; a fight invariably ensued, and Popeye always had to resort to spinach to outdo Bluto. Popeye cartoons are well known for their exaggerated, over-stated motion-effects. And in this particular image Hamilton glommed onto a beauty. In the repeated motif, it is hard to tell whether there is only one man fighting (Popeye) or two (Popeye and Bluto). And because the arms multiply to thirty or forty arms in total, one could even begin to see the figure as a grotesque new being of Leviathanesque proportions.4 One deduces that there is only one person here, seeing as the front of each forearm sports that telltale anchor. One imagines that the image refers to the familiar sight-gag of the opponent having stepped out of the fight-cloud, so as to watch the solitary fighter battle it out with no one (the ultimate humiliation). Is the joke on the artist, on the viewer, on the art world? Why this pile up of limbs held up for all to see? Why the macho image of the cartoon-cloud fight? Why must we look at a series of paintings that are essentially repetitions of the same content over and over again? One might answer: social critique, auto-critique, and finding new strategies that allow one to continue paint. They all go hand-in-hand, battling it out on the canvas. The strategy materializes itself allegorically as this repeated, accreted form. In repeating the same form over an over again, the image is what it is and at the same time it is what it is not. The painting itself has become a wrestling match with paint.

The mass of limbs, the variegated faktura of the paint, the limited black-and-white palette, and the black-outline low-brow cartoon subject matter remind me of Philip Guston. It may well be an homage to Guston, and the continued relevance of his idiosyncratic practice: never following trends, uncompromising in subject matter, alienating and comic all at once. Other painters come to mind. Mont Saint-Victoire was the topic of between seventy and eighty paintings by Paul Cezanne, all painted within a twenty year period at the end of his life. Apparently his concern was not to render the mountain exactly but to achieve a sense of “harmony parallel to nature” (his words). The return to the self-portrait was a constant for Rembrandt. If one is unsure of what to paint, or doesn’t have anyone handy, there is always oneself to fall back on. How to paint took over from what to paint.

Hamilton deals with his subject a little more allegorically (more in line with Guston), the Popeye figure revealing a ridiculous masculinity, action driven, predictably iterated motions, reflecting all the homosociality and self-love involved in pursuing that so-called ideal love object. The daisy at the top is almost an after-thought in each one, the symbol letting the viewer know ‘why I am going this.’ The lone daisy seems to point to an objet petit a5 that fills in for the absurdity of going through the motions of such exploits each day—the struggles in the studio, the smatterings and daubings, something to hang onto, that constant that you can always turn to when life begins to lose a bit of its luster… At the same time, the limitations on the painting’s format, palette, and subject matter were perhaps a strategy that forced the artist to focus solely on the paint itself – a loosening of subject matter so as to better confront the stuff of paint. This loosening is hinted at in the titles of each painting or grouping of paintings, in their emphasis on pared down being: the grouping of four–“we are”; and then the various individual paintings: “he is”, “she is,” “you are,” “I am.”6 The paintings are. They are paintings made of paint. And while they do represent also, this is done repeatedly to the point of ridiculousness or exhaustion. As a group and individually. The one is many and the many are one. We are all in it together, and it is looking more and more comical and grotesque, but nonetheless viscerally moving, the longer it goes on.

Get in touch with Jordy Hamilton.