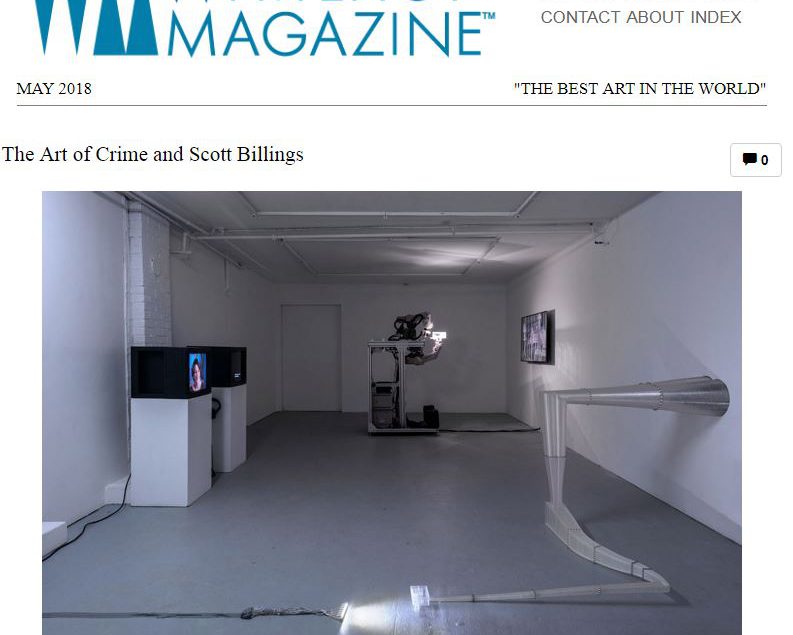 Whitehot Magazine: The Art of Crime and Scott Billings

As a part of Capture Photography festival, Scott Billings is exhibiting Skull Practice at Wil Aballe Art Projects (WAAP) in Vancouver. The title stems from a type of football practice in which players learn to execute plays through diagrams rather than physically doing them. Similarly, this exhibition thinks through types of crimes without actually committing them (thankfully). Skull Practice features modern technology like robotic arms and 3D printing, leading the white gallery walls take on the sterility of a lab. In this “lab” viewers contemplate the mind of a criminal. How would you plan a heist? How do you pick your victim? Is it possible to pull off the perfect crime? By raising these questions, the three pieces in “Skull Practice” implicate the viewer as an accomplice.

Through 3D modeling, How to Break into WAAP presents a hypothetical plan for a grand heist from the gallery into Billings’ studio. As the title suggests, the piece was created specifically for the exhibition at WAAP. The work was conceived after Billings voiced his anxieties about leaving thousands of dollars worth of equipment at the gallery. The two spaces are connected through a series of infamous crime tunnels (like the one used in El Chapo’s escape and the Langley drug smuggling tunnel). The transparent 3D model gives the eerie sense of finding evidence of a premeditated crime.

Scott Billings, How to Break into WAAP, 2018. Courtesy of WAAP and Mike Love.

Good, Bad, Flat, Round Billings explores fictionalized crime. Using an algorithm that condensed 20 seasons of “Law and Order”, Billings found subtitles that refer to victims using he/she. Men are typically discussed in reference to their money and career, whereas women are described with references to their looks or as mothers. This fragmented gender narrative plays on a loop between two TV sets. Women are grouped together on the left, then the video alternates to the right to show the men, with the opposite TV playing subtitles. A set of headphones allows the viewer to listen directly, hearing the cliché lines from bit-role actors.

In the back of the gallery Übermensch, uses two robotic arms to move a camera, lights, and a 3D printed set. The piece features an excerpt from Alfred Hitchcock’s 1948 film, “Rope”, that was inspired by a murder in 1924. Nathan Leopold and Richard Loeb murdered Bobby Franks, because they believed he was “an inferior human”. This relates to the title, Übermensch, a term used by Nietzsche to mean superior human. Übermensch reproduces a scene in which Jimmy Stewart’s character explains how he would kill a man. The miniature set is rotated and projected onto the wall in sync with Stewart’s disembodied voice. With Übermensch , Billings enters a discourse with Hitchcock about representing murder.

Wil Aballe’s curation gives a feeling of progression in a criminal’s mind from hypothetical to actualized. With his Skull Practice , Scott Billings makes us think about crime and try to understand it. So much so, that after leaving the gallery, you wonder how you would break back in. WM