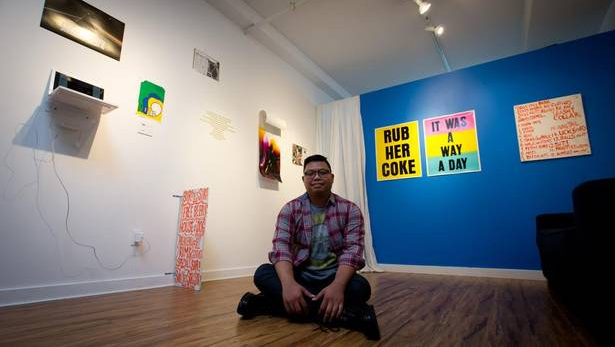 Exploring the idea of being gay

EXPLORING THE IDEA OF BEING GAY
Marsha Lederman, The Globe and Mail

“It’s a tiny space,” Wil Aballe says shortly after I enter his studio apartment/art gallery in Vancouver’s Mount Pleasant neighbourhood. He’s not kidding. By the time you step through the narrow entrance hallway, squeezing past his bicycle and bookshelves stuffed with novels, travel guides, and art books meant for coffee tables, you’re looking at about 350 square feet of kitchen/living room/gallery space. (His bed is tucked behind a wall built for one of the shows.)

Mr. Aballe, 35, has been operating Wil Aballe Art Projects (WAAPART) out of his live/work studio since early 2013, putting on 15 shows to date (plus five off-site), with his latest opening this week, ahead of Vancouver’s Pride festivities. A Spectacle and Nothing Strange includes work by 11 artists, including the celebrated Vancouver-based painter Attila Richard Lukacs.

Mr. Aballe met with The Globe and Mail at his kitchen table (before it was dismantled to make room for opening night) this week.

What led to your decision to open an art gallery in your little apartment?

I moved here four years ago after a breakup that was pretty significant. And I thought: Oh, the walls are good; the art will look good on the walls – my own art that I collected. [Eventually] I was asked to curate a few shows. And there started to be a rumour that I was opening my own gallery. I actually hadn’t even thought about it; I had no plans to open a gallery, I hadn’t looked at spaces, I hadn’t visited the idea of opening my space up. But I thought – well, that’s interesting.

But this place is tiny.

There have been precedents. I’ve seen some really interesting art shows in unconventional spaces. There’s a space in Toronto that’s literally a storefront vitrine. I think there’s something really interesting that happens when art functions under restraints. But I live like other people live. Like this whole area [where we’re sitting], the exhibition area that’s pretty minimal, was full of stuff. I was living here. And it was cluttered.

What was your background? Were you working in visual art?

I was actually working as an engineer and I still work as an engineer. I’ve maintained a day job because it pays gallery bills and allows me to fund the projects. I became a buyer of work, and as a buyer of work, people started referring to me as a collector. There weren’t very many people in their 20s who collected art in Vancouver – there still aren’t, there’s only a handful of them. So I became known as a supporter of the arts and I got asked to sit on a board [at the Contemporary Art Society of Vancouver], and on that board I ended up organizing talks for the artists. And suddenly I got asked to curate three shows.

What has this done to your experience of living in this space?

It still kind of functions like a living space when I don’t have hours – and I only have hours two days a week; otherwise it’s by appointment. When I have hours and appointments, it has to be minimal and pristine; it’s got to be all business on this side of the wall. But on [other] days, it functions like my apartment. If it’s laundry day, in the middle of the exhibition space there will be hanging racks. I have to be careful with the art and make sure I don’t accidentally splash wine on anything.

This show is timed for Pride – but the common theme is text.

I wanted to do a gay show without doing a gay show because there’s a lot of bad gay art shows – I’m not talking about anything local – where there’s genitalia, there’s chests, there’s faces, it’s very Herb Ritts and Robert Mapplethorpe. And that’s fine. But I wanted to explore the idea of being gay in all its many facets; the fact that gay artists are gay people and gay people are multifaceted. So there isn’t one idea that people can walk away from seeing this show about what gay means. I didn’t want to neuter the show by taking ideas of desire and sexuality out of the show. They’re still very much embedded within the show. But that can’t be all of it. It’s an important segment of anybody’s life, but it’s only one component – and dealing with people who are artists, they have very specific things that they explore.

Does any part of you dream of opening a gallery space not in your apartment?

I’ve actually looked at spaces, but rents are very expensive in Vancouver. I’ve looked at a couple of spaces that were like 1,000 square feet and were like $4,000 a month. So I’m looking for the right space that is sustainable. I know I’m limited by the kind of art I show here. The next show will only have five paintings. That being said, I do have a sculpture show in November.

How many people can you fit in here?

I don’t really know. But for the first opening we had [in January, 2013], there were like 300 people here [throughout the night].

What happened to all that clutter?

I rented a couple of storage lockers. I live very minimally and I actually haven’t seen the clutter in a year-and-a-half. I should probably just have a garage sale.

This interview has been condensed and edited. A Spectacle and Nothing Strange is at WAAPART until Aug. 23.