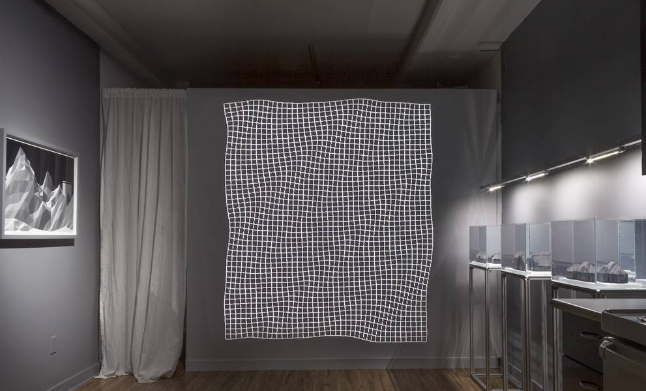 Born in France and based there and in Vancouver, Nicolas Sassoon’s true home, it seems, is in cyberspace. His best-known art takes the form of animated GIFs, which viewers can access on his website. Still, Sassoon also creates two- and three-dimensional works that exist in the material realm, although they are digital in origin. His preoccupations include the ways virtual space may be translated into the physical world. More specifically, he is curious about the way computer technology shapes our built environment.

Dream Homes, Sassoon’s small show at WAAP, in gallerist Wil Aballe’s living space, conflates landscape art and imaginary architecture. The works here were inspired by conversations the artist had with his father regarding the senior Sassoon’s ideas of a fantasy holiday home on a cliff top.

The digital series “Homelands” consists of ink-jet prints in black, white, and grey, depicting a squat, squared-off tower set in different locations in a geometricized mountain landscape. Far from looking like a luxury home, the building Sassoon has depicted resembles a sentry post or the corner of a fortified enclave or bunker.

It’s a paradoxical structure that suggests survivalist withdrawal and secret government surveillance rather than wealth, freedom, and a panoramic view. At the same time, the cubistic landscape appears to engulf the house in fractured waves—a tsunami of much-enlarged pixels. Formally, this work references vintage computer graphics.

Philosophically, nature and culture appear to be functions of the same digital vision of the world.

In his “Mansion” series, Sassoon has used a 3-D printer to create architectural models in polymer concrete. Each of his three miniature structures is again inspired by the idea of a fantasy home, this time of the French-château variety, and each dark-grey model is submerged in its own water-filled aquarium. Sassoon relates his way of working with 3-D printing to the Japanese art forms of bonsai and suiseki, in which miniature trees and underwater plants function as objects of contemplation. What seems to be missing in Sassoon’s miniatures, however, is any sense of a dreamy or meditative state. Brightly lit and eerily still, his model homes are less contemplative than inert. That said, in photos posted online, earlier versions of the model homes are covered in tiny bubbles, apparently a function of off-gassing but also a wonderful, if transitory, alteration of their static condition.

Curtain 1, an animated GIF projected onto a pale grey wall, is delightfully engaging, almost mesmerizing. Intended to suggest a window curtain gently moving in a breeze, it consists of a grid of bright pixels through which waves repeatedly pass, from the upper left corner to the lower right. We are invited to think of the undulating curtain and the unseen window behind it as representing a portal to the digital realm, and, okay, we’re good with that.

Robin Laurence
News
Newer Post Show Suite: Art may imitate life, but for Wil Aballe life in a mini gallery becomes the art Older Post Mr. Peanut for mayor: when politics was more than a joke