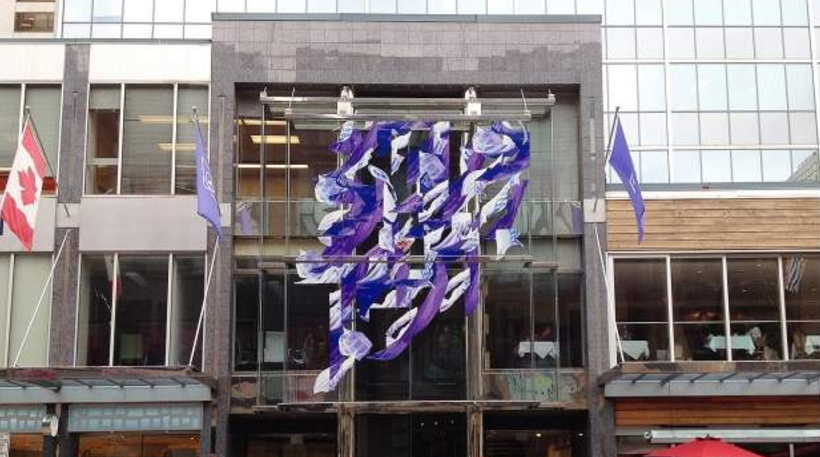 Ones to Watch in 2015: Artist Joseph Staples

Joseph Staples had an outstanding year in 2014.

He was chosen by a jury as the recipient of the Contemporary Art Society of Vancouver’s Emerging Artist Award. He also made new work for five solo shows and three group shows.

“I want to step back a little bit and regroup,” he said about his plans for 2015.

“Let’s see if I can build on all the stuff I got done this year. It was such a crazy, great year. I can’t believe I got as much done as I did. I feel really lucky.”

Even if you haven’t been inside an art gallery in years, you might recognize Staples work from seeing it on the street. In the first few years of the millennium, numerous examples of Staples’ collaged photographs and screen prints were on outdoor walls around downtown Vancouver.

One of his projects in 2014 was a public art work commissioned by the Burrard Arts Foundation. The collaged work — Falun Dancer 3 — is located above the Alberni entrance to the Burrard Building in downtown Vancouver.

Most recently, Staples was part of a group show in at the Contemporary Art Gallery at Southeastern Louisiana University. He set himself a goal of making all his work on site. He made four free-standing walls, covered them with plaster and then carved images derived from yoga into the surfaces. It took him three weeks of 12-hour days and one 36-hour marathon at the end.

Oddly enough, Staples doesn’t practice yoga but he does practice transcendental meditation. Yoga interests him because of its repetition.

“Yoga is about repeated poses and not necessarily looking for perfection but just looking for a continual practice,” he said.

For that exhibition, Staples said he wants to create images that use collage in non-traditional ways. Even if some of his work may not at first look like collage, they are to him because of the way he takes an image and lays it on top of itself over and over again.

He’s also plans to include video and create works that build on what he did for the exhibition in Hammond, Louisiana, which is located about 100 km northwest of New Orleans.

In addition to Wil Aballe’s gallery, Staples’ work has been shown locally at the Vancouver Art Gallery, Equinox Gallery and Access Gallery.