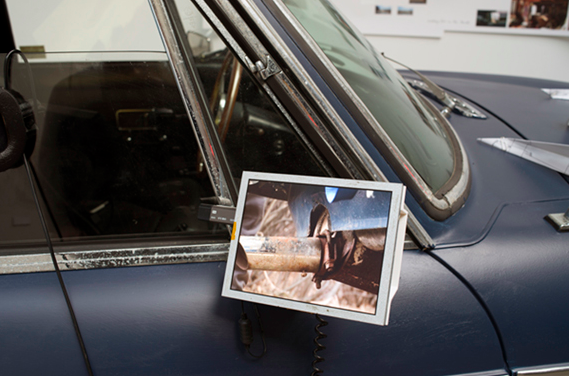 Current or upcoming exhibitions or similar:

What are you most proud of accomplishing, as an artist?

The poetic translation of a gesture or a human movement into a piece of media. I can think of two, maybe three shots in the last 15 years that I think kick ass.

Describe a typical day in your life as an artist.

Either one of my two kids or my dog, Pina Bausch, wakes me up. I am not happy that the parenting of both humans and animals has pushed me into the realm of having to function cohesively in the morning. Lots of strong tea. Get everyone fed and out the door to school. Travel to the studio. Happy for some solitude. I shoot some days, edit others. Writing and correspondence. Lately I’ve been getting back into the dance studio to improvise with the camera along with dancers and performers.

What’s the last show that you saw?

Your collaborative multi-media installation “IcarusCar” — created with Keith Doyle — communicates nostalgia for a moment of hopeful invention (one we haven’t lived), and touches (or torches) it with Sisyphean defeat. When you regard the contemporary moment, are you hopeful? What is possible?

The installation does touch elements of nostalgia, as it takes the myth of the flying car as a starting place, as created by Molt Taylor in the 1950s. And yet process, creation, invention, or art-making became a large part of the fragmented narrative. A documentary element crept in as the car kept breaking down and having problems, and became a metaphor for ambition and hubris. Your wings may melt when you fly too close to the sun à la Icarus, but it’s also hard to make a car fly when it won’t drive.

And yet for all that, the piece is hopeful, rather funny, and there’s the goofiness of putting a full sized MGB-GT in the gallery. And we do make the car fly, not only with aftereffects in the media but with a whole room full of paper airplane ‘flying cars.’

What is the Canadian artworld lacking?

That’s a very Canadian question, focusing on the lack rather than the plus. I’m pretty green, but I think the Canadian artworld is rad.

In what ways (if at all) do you see yourself or your practice misrepresented?

If there’s been any misrepresenting, it’s been my own fault. I think I’m on my fifth career now. Professional ballet dancer, dance filmmaker, cinematographer, documentary filmmaker, contemporary dancer, and now contemporary artist. Of course they’re all related, at least in my practice, but you’d be surprised at how varied the worlds are, from dance to film to art. Different countries too; Canada, the UK, Germany, New York City for many years, now Vancouver. I thought after the difficulty of working in the dance world and the documentary film world I would take it easy on myself and try the contemporary artworld …

I like going to museums and galleries in foreign cities. The familiarity of a ritual with the excitement of something new. I used to spend so much time in theaters that going to a museum was such an escape. I try to go without my children as they affect the experience. At the Tate Modern recently, I went to two gift shops, had lunch, ice cream, played at the playground, all before I managed to see any art …

In “Chromatic Revelry,” you marry archival film stock of 1990s rave-culture to Bach’s measured Baroque fugues, producing quiet choreographies and a sense of aesthetic euphoria. What was the impetus for this project, and what do these various unions (abutting histories, media; or framing disorder with structure) mean to you?

It’s interesting that the Super-8 film reads as archival, because I shot all that footage myself at raves in the ‘90s. Of course that makes it my own archive, but I did spend a lot of time dancing at parties and waving a Super 8 camera around. So much work today, both with media and still photography, is made with found footage that it has become unusual to shoot your own footage. The impetus was to finally do something with all that Super-8 film sitting on the shelf.

I often get asked why I paired Glenn Gould’s rather quiet piano fugues and sonatas to the raucous dance footage. It felt natural to me, the same metronomic beat. I like the juxtaposition of a formal timeline, in this case the structured music and visual messiness. The music didn’t move at all, Bach being sacrosanct.

The result is something trans-historical that comments on the nature of revelry itself, rather than a moment in time. And it felt like an important piece for me as it married many aspects of my practice. It’s sort of a dance film, sort of a documentary (in that it documented a personal moment) but ultimately an art film.

How do you feel about the relevance of beauty in contemporary art?

I was reading a lot about The Sublime  (yes, capitals) when I made the films for “Chromatic Revelry” so I think that crept into the final media. I like the juxtaposition between ugliness and beauty. The quotidian, accidental, and private moments. I’m presently choreographing bulldozers in a new installation called “deConstruction.” It’s quietly political in that it’s a comment on how Vancouver treats its historical buildings, but there’s something poignant in watching a 100-year-old building fall down to a Chopin nocturne.

So yes, I appreciate beauty in art, and I think it continues to be relevant, no matter how conceptual your practice is. I mean, I was a ballet dancer for Christ’s sake. I got awfully bored being fifth flower from the left, but I did enjoy the Tchaikovsky.

Do you collect anything?

I like to collect art. I know that’s not a very popular answer, but I think most artists are collectors by nature … The art collection I share with my partner Keith is very personal, though; I almost think of it as mapping our lives. Work made by friends, trades, art from my family. I have a rule that there must be some sort of personal connection. Although that can backfire. We had the brilliant idea when we got married to ask for artwork instead of stuff. Of course we didn’t get any work from our actual artist friends, just a bunch of “arty stuff” from my mother’s friends. I would have preferred pots.

What are your studio or art practice indulgences?

What’s the last artwork you purchased?

A photographic diptych called “Mastery, Projection and other Failures” by the Everything Company (aka Jason Gowans and Michael Love). They had a rad show at Access Gallery last fall, and they’re friends and colleagues so we’re housing the work for them until their big museum retrospective.

What’s the first artwork you ever sold?

I sold a video last fall at Art Toronto! My “Chromatic Revelry” film. It was so exciting. I did a made-up “I sold a video” dance in the hallway. Because video is hard. And then I later found out it was sold to respected, visionary collectors, so that made it even sweeter.

Where are you finding the greatest opportunity in the Canadian artworld?

Eye contact. Or lack thereof. It’s annoying when someone you had a half-hour conversation last week won’t make eye contact because they’re talking to someone more important.

Do you make a living from your practice?

The Narrow, at Main and 2nd Avenue in Vancouver. It also happens to be in the same building as my studio, so it’s rather dangerous. Awesome fish tacos and good beer.

What under-appreciated artist, gallery, or work do you think people should know about?

Wil Aballe Art Projects or WAAP. I really like how Wil is winging it and putting together smart, aesthetically challenging shows, all from his apartment. It’s not even a good apartment, it’s a 500 sq. ft New York-style crappy apartment. And he still manages to make it work and there’s an interesting buzz and the openings are really fun with a great mix of people.

Yvonne Rainer, Trisha Brown, Lucinda Childs. She’s passed on now, but I did name my dog Pina Bausch (it was between that or Donald Judd). Maya Deren would be in there too if she was around. Lots of female dancer types.

What is the art compliment you most often receive?

What is the art compliment you most often long to hear?

What more do you hope to accomplish as an artist, before you die?