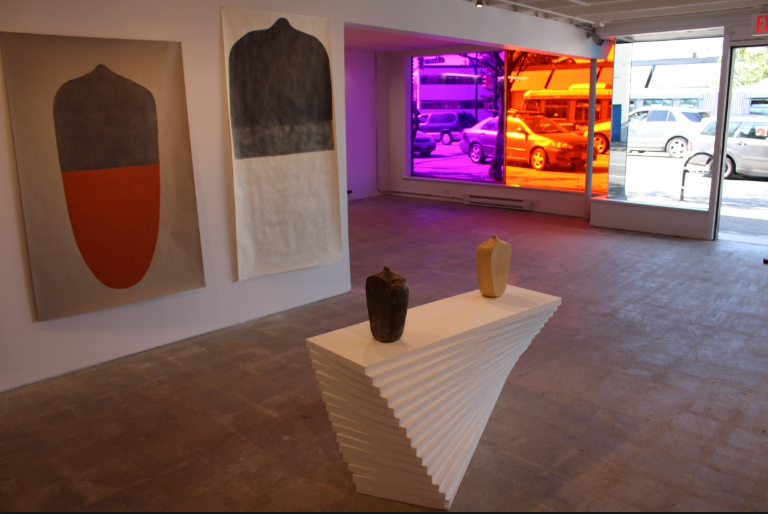 Pencil shavings, obscured graffiti, a movie poster floating in a swimming pool—the element of chance stands behind much of the work in Post Rem, an inaugural exhibition at the Burrard Arts Foundation. So does formalism—a focus on qualities such as shape, line, colour, and composition rather than on content—which is enjoying a post-postmodern resurgence in Vancouver and elsewhere.

BAF is a nonprofit visual-arts organization intended, its website tells us, “to promote the development of, and excellence in, the visual arts in Canada”. When BAF’s young director, Christian Chan, toured the Straight through the exhibition on its opening weekend, he spoke of the organization’s emphasis on emerging artists, and with one exception, emerging is what we saw. (With no exceptions, male is also what we saw. Why?) BAF, located in a converted storefront at 108 East Broadway, has a public-art component too. It supports artists working on projects intended to be temporarily or permanently sited in the urban environment.

Guest-curated by Wil Aballe, Post Rem surveys deftly composed works by Evan Broens, Jason Gowans, Patryk Stasieczek, and Matt Trahan. It also spotlights recently rediscovered photographs by one of the West Coast’s most esteemed senior artists, Michael Morris. Post rem, Aballe explains in his curatorial statement, is a Latin phrase meaning “logically subsequent to the existence of particulars”. In this show, he says, artworks in a range of media, including sculpture, photography, and drawing, have been inspired by “chance occurrences”.

For instance, Trahan’s gridded arrangement of little conical shavings originated in the simple act of, yes, sharpening his coloured pencils for the main event, his large, abstract drawings on paper. And the vessellike shape that Broens has worked in bronze, balsa wood, and plaster, as well as through photographs, drawings, monoprints, and concrete poetry, is based on a mismatched patch of paint someone used to cover graffiti.

Chance is a little more difficult to discern in other works here. Stasieczek has created both an architectural intervention (across two of the gallery’s front windows) and a wall sculpture out of coloured photographic gels. Gowans takes black-and-white photos of awkward forms he creates by nailing pieces of wood together, then pushes those images into the further reaches of abstraction. Contact prints from this series look like contemporary iterations of 1970s abstract illusionism: Gowans’s strangely voided shapes cast incongruous shadows.

The most beguiling work here is the product of chance to the nth degree. Morris was attending a party in Los Angeles in 1965 when a poster of Jean Harlow fell into a swimming pool, then warped, bunched, and crumpled in compelling ways. Water and wind caused the eyes, nose, and mouth of the doomed movie star (who died in 1937 at the age of 26) to become strangely magnified and distorted. Morris shot colour slides of the poster as it transmogrified in the green water and, in 1978, he developed eight small Cibachrome photos from the slides. Subsequently, the slides were lost and the prints placed in storage. Only recently and unexpectedly did Morris come across them again—a happy unearthing because they are the highlight of Post Rem. Perhaps this is because they link their formalist qualities and their chance inception to poignant social and psychological themes. In these works, we see the shadow of mortality, the instability of success, and the way time crumples, then washes away, all traces of beauty, glamour, and celebrity.