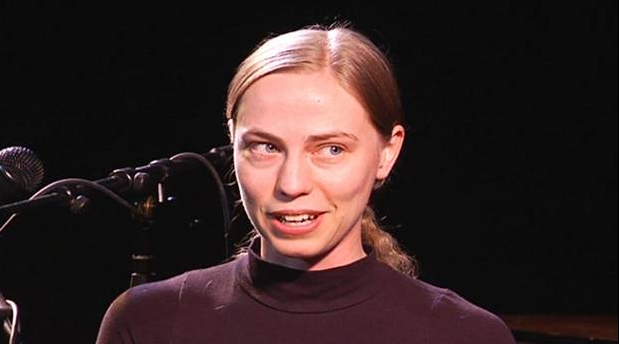 In this sometimes uncomfortable show, Zeesy Powers invites strangers on stage to give them her opinion of them

I Will Tell You Exactly What I Think of You begins with Zeesy Powers, 31, alone onstage, a camera off to the side. If you want to know exactly what she thinks of you, you can sign a contract and take a seat to her left.

“For the past two performances, I’ve been keeping it a little low-key,” she said on Saturday, during the last of three events for the SummerWorks festival in Toronto. “I thought we’d bring it up to something a little intense and ugly tonight.”

A full hush. Then, a middle-aged man, with a workaday resemblance to porn star Evan Stone, stepped forward. He stared intently at the artist. “You look like a sadder version of an actor who sat in that chair last night,” Powers told him, adding that, judging by his face, “Maybe things have worn at you a bit more.” She spoke lucidly, though not in a cruel way, about his “sad, worried lines,” the psychology of his ponytail, and his “sultry” eyes. He took it with stoicism. When he mentioned he was trying to be more honest with himself, Powers replied forcefully, “That is not a good reason to come to this show tonight.”

I’ve known Powers socially, not well, for about a decade. She’s been performing this show for seven years, but this was the first time I’d gone to see it. I’d always been scared to, and though I loved the concept, the fact that Powers could pull it off made her seem a little other than human. This is a typical misconception, she explains over the phone: “People in the audience are expecting Don Rickles, like an insult comic or something like that. And I’m not an insult comic, at least not intentionally.” Onstage, she appeared to be more vulnerable than any of the eight participants, partly because her task is impossible by design.

The piece originated at a zine fair, where Powers, an interdisciplinary artist, was selling portraits for $10. “I thought it would be funny to sell something that I thought nobody would buy,” she says. So, for half the price, she offered to tell customers exactly what she thought of them. Like the portraits, the readings were only her take, for which she was surprised to find a demand. “I realized that a lot of [people] were looking for something a little more nuanced than just a confrontation.” For some, it was “just the fact of having somebody pay attention to them for an extended period of time. It’s almost a little bit like going to the spa.”

The live show, with its intimation of gore, was inspired by daytime talk shows; for a while, Powers kept a box of Kleenex onstage. This was ballyhoo – the “nurse” stationed outside the midnight movie. Hurt feelings are not the point. Her judgments are nuanced. When they’re harsh, she talks them out. “We invited all the mayoral candidates to come,” she says. “And none of them did. But somebody said, ‘Oh, it would be so exciting to tell Rob Ford exactly what you think of him.’ Well you know, I could very easily tell him that I think he’s fat, but that’s also not exactly what I think of him. I think he’s a really sad person who’s trying his best.”

After the ponytailed man came a young actress, for whom Powers mostly predicted success, followed by a polished man in his early 30s, pegged as apple-cheeked but sporadically intense. Halfway through the show, a graceful woman in her 70s emerged from the front row. “Ohhh,” Powers said affectionately, breathing heavier. “You already know what I think of you.” This woman had been a mentor of Powers for more than a decade, and the reading seemed so effusive that I barely noticed the part about mortality; I ask Zeesy if she’d pulled her punches. “The big one with that was talking about death,” she says. “Of course, by the time I was finished talking about it, it didn’t seem bad at all. To just say to somebody, ‘You really make me think about dying’ – well, that’s super harsh. And I did say that,” but couched in enough detail to soften the blow.

Before that, I’d gone up. I hadn’t planned to: When you know someone long enough without really knowing them, you tend to assume they dislike you, for all the reasons you’ve disliked yourself. But I was mostly touched by what she had to say, and even when I didn’t exactly agree, I found myself absorbing a certain characterization; it was flattering. (I later ask Powers, who hadn’t known I was coming, if the possibility of my writing about the show had influenced her reading. “I think I was more concerned that I might have to see you again,” she replied.)

“People can be very selective – people should be very selective in what they want to hear, or what they want to take with them,” which is why some participants, she says, find it so hard to watch themselves after the fact. In this way, the performance “isn’t any different from a cold reading that a travelling psychic would do. I’m just much more transparent about my methods and also my prejudices.”

What a psychic offers – or an astrologer, or even a therapist – isn’t the truth so much as the illusion that somebody knows it. My need to feel as though someone has all the answers is different from my urge to figure them out. Onstage, I felt myself imbuing Zeesy with these powers. I was projecting my own reasoning, but I’d paid for the opportunity, which is partly the point of the piece.

“I do feel uncomfortable if people walk away going, ‘Yup, everything got sorted out in that session. We got some answers, we figured out the truth of the matter.'” It’s impossible to know exactly what you think of someone: Any one person is too many people. As Powers makes explicit, her readings are partly a reflection of her own needs – ones that are sometimes elusive to her – and partly a response to those of her subjects. The spectacle is of two people trying to make sense of themselves, alone with the same motivations. “It’s an obnoxious setup,” she says, “that all just leads to this one little point: Am I okay?”

See a selection of performances of I Will Tell You Exactly What I Think of You, here1.